by Hank Boerner – Chairman, G&A Institute
Lots Going on at Met Life Stadium Last Sunday — Yes, Seahawks and Broncos on the Field – But Hear What the Stadium Managers Were Doing as “Corporate Stewards”
We could call this Walking the Talk – putting good intentions into action to be an outstanding corporate steward of the environment.
MetLife Stadium, Meadowlands, New Jersey: venue for Super Bowl XLVIII and now more familiar to the millions of people who watched the game on TV. The stadium managers lay claim to being a “Leading Venue in Carbon, Energy, Water and Solid Waste Reduction.”
This is home for the New York Football Giants and the New York Jets. (Yes, it’s really located in New Jersey, but hey, New Yorkers can also claim to the teams, as well as the proud New Jersayans! Besides, you can see the place from up top in NYC skyscrapers.)
The stadium replaced an existing facility a few years ago. In June 2009 the stadium signed an agreement with US Environmental Protection Agency pledging to become an “environmental steward” by implementing green initiatives to reduce the venue’s carbon footprint. And, help to improve the planet’s environment.
The stadium opened April 2010. MetLife Stadium released its first environmental progress report in July 2011 — and the latest in 2013, documenting reduction of 234,834 MTCO2e (metric ton carbon dioxide equivalents).
Goals were set in an MOU with EPA:
• Using 40,000 tons of recycled steel to build the stadium; recycling 20,000 tons of steel and 30,000 tons of concrete when the old stadium came down.
• Construction waste was recycled (83%); some was used as backfill, some as sub-base for nearby roadway projects in New Jersey.
• Seating for those rooting Super Bowl fanatics? Partially made from recycled plastic and scrap iron. The stadium itself is a huge recycle — it was built on a former Brownfield.
• Throughout, designing in ways to reduce water and energy consumption. was a priority.
• Mass transit was used to move large numbers of fans to football games – -especially including the Super Bowl (NJ Transit trains were packed to and from Manhattan – a good sign, even if temporarily uncomfortable for fans with prices tickets anxious to get to the game and then home again.)
According to The New York Times today, here were 85,000 fans on hand plus 10,000 or so support staff, contractors, and others making it all happen. At the urging of public agencies and the stadium, leading up to the game, ticket holders were encouraged to ride the rails — 28,000 were reported using NJ Transit (the railroad), which can handle 12,000 per hour an the route.) Oh well, it did prove the concept of using public transportation vs. gas-guzzling private auto. (There was also bus service, so many, many cars were kept off the roads — making it more of a green, low carbon event.)
And what about the food? We learned on NPR yesterday that Americans spend more than US$1 billion on snacks and food and goodies while they take in the Super Bowl at home, in sports bars, at parties. Much of the waste goes out for garbage, and on to landfills.
So what happened on site with the tons of food consumed at the Super Bowl?
Well….the stadium reports that much of the waste is right now being composted and recycled! “Super Bowl Dining at MetLife Stadium Will Be the Greenest In History” proclaimed a news release on January 9th.
The communications team explained: With partner (foodservice) Delaware North Companies Sportservice, waste is to be converted to biodiesel fuel; all kitchen scraps are composted; leftover food is donated; cardboard, plastic, glass, aluminum, paper are recycled; no polystyrene containers were used; and ENERGY STAR equipment was used. (Note that at this huge facility, 200 on-site restaurants can feed up to 100,000 people a day.)
For its efforts, MetLife Stadium won the Green Restaurant Association (GRA) “Green Restaurant” certification — the first stadium to do so. 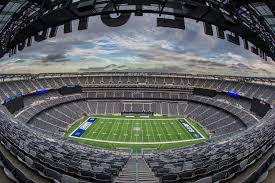 A shout out to the managers at this great facility. It was a great game, with lots of excitement provided by the Seahawks and Broncos. With Wonderful security provided by New Jersey and New York police units, Homeland Security, FBI and who knows who else. (The NJ Air National Guard was even overhead in fighter aircraft.) People felt “safe,” and that was important to the fan experience.
And this is great corporate stewardship being exhibited by the MetLife Stadium folks. We should mention prominent “partners” at the stadium – Bud Light, Pepsi, Verizon, MetLife Insurance (and its MetLife Central program) — all did their part.
Imagine if the dozens of other stadia owners around the nation followed the MetLife Stadium corporate stewardship example. Especially as the wealthy owners of teams regularly appeal to the public sector for financial support in building these massive and very expensive new venues.  Sort of, let’s give back as good corporate citizens, we could say! (After all, professional sports teams, like those in the very financially-successful NFL, are big business.)
You can learn more at: http://www.metlifestadium.com/getting-here/general-event-parking-information

Important Perspectives – 1995 – Sustainability in Focus Welcome, Janet Yellen to the Fed Chair – We Have Questions